Part of Emerging Technology for the Built Environment series

Smart Cities integrate the “Internet of Things” (IoT) in combination with other intelligent devices to provide a higher quality of life and enhance competitiveness. This article reviews the current status, giving examples of already existing smart cities across the globe, and an overview of the major market players, as well as the future prospects. Part of the Emerging Technologies for the Built Environment series.

City design has remained essentially unchanged for the last 1000 years, but rising populations are forcing us to re-think the way our cities are designed. Currently more than 50% of the world’s population lives in cities, and as populations rise there are greater challenges with respect to traffic control, reducing emissions, availability of resources and generally making the city a pleasant place to live and work.

There is increasing competition amongst cities to engage and attract new residents, businesses and visitors, and those that incorporate smart technology are more likely to stay ahead of the game. Previously cities built skyscrapers to impress; the taller the building the better. Future cities aim to impress by incorporating a network of technologies and becoming more carbon neutral. We live in an Information Age, and the development of communication systems has facilitated increased connectivity via the “Internet of Things” (IoT). The IoT interconnects smart devices such as mobile phones, computers and sensors, enabling the transfer of vast amounts of information, otherwise known as “Big Data”. Smart cities aim to use this data to get to know the city better, to spot trends and target weaknesses in the infrastructure and ultimately improve the city design.

ABI Research estimates that over 40 billion devices will be wirelessly connected to the IoT by 2020. 1

What are smart cities?

“Smart City” is a general term for any city that uses advanced technology to address and improve different aspects of society, including (1) Planning and Management, (2) Infrastructure and (3) People, as shown in the image below. The degree to which each aspect is addressed will depend of the profile of the individual city, e.g. location, social structure, availability of resources etc. 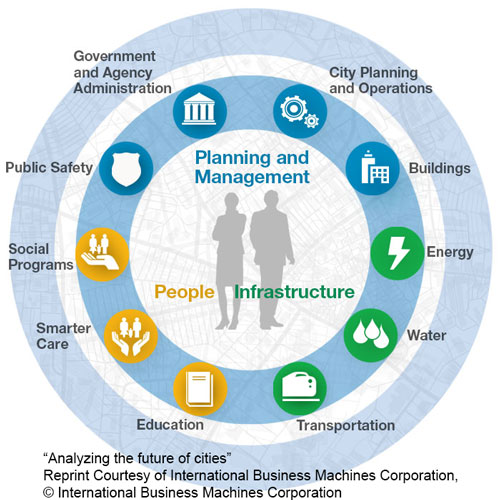 A government that is better informed with real data can make better decisions about how the city can prosper in the future.

Examples of Smart Cities are already in place all over the world.

Rio de Janeiro, Brazil opened an operations centre in 2010 which uses an impressive 80m wide wall to stream video feeds from 900 cameras around the city. Satellite maps feed in weather data and fifty operators from 30 different city agencies monitor the city in real-time. Data analytics software is used to predict how traffic will flow, and where accidents or flooding are likely to occur. In the case of an emergency the operators can act quickly, diverting traffic and notifying the correct authorities. The media room is situated directly above the operations centre, facilitating the transfer of information. The operations centre enables an enhanced level of connectivity between the governing bodies and the residents of the city. The residents can view the video cameras real-time using the internet, and notify the authorities of problems in the city by taking photos and sending them via their smart phones.

Barcelona, Spain has embraced the concept of the IoT and installed free wifi across the city, allowing the citizens to be constantly connected even whilst travelling on the metro. Statistics indicate that 40% of the traffic in city centers is caused by cars trying to find parking spaces. In Barcelona they have implemented parking sensors with an online app, so that the residents can view online the availability of parking spaces.

In November 2014 the city of Copenhagen, Denmark won the prestigious World Smart City Award, which is awarded annually at the Smart City Expo. The award was granted for the project “Copenhagen Connecting”, which aims to use big data from mobile phones, GPSs in buses and sensors in garbage bins and sewage systems to reduce traffic congestion, air pollution and carbon emissions. The city was previously ranked as the number one smart city in Europe in 2013. Copenhagen has one of the lowest carbon footprints per capita in the world. It also has an impressive number of resident cyclists- approximately 40% of all commutes are conducted by bike. The city continues to set ambitious targets for the future, aiming to be completely carbon neutral by 2025.

New Taipai City (NTC), Taiwan has been ranked as one of the top seven smart cities for 2015. NTC has connected more than 300 schools by putting tablets and computers into classrooms and has facilitated the installation of more than 10,000 Wi-Fi hotspots in convenience stores. The government has begun to implement a public and service cloud- called the G-Cloud. The public cloud aims to enhance internal administrative efficiency, whilst the service cloud aims to improve the interaction between the government and the citizens.

Major IT companies around the world are addressing the potential of smart cities, focusing on the interconnection between cleantech and information technology. General Electric, Siemens, IBM and Cisco , as well as global consultancies such as Accenture, Arup and WSP , are addressing the challenge of how cities can use technology to optimize resource use. GE’s Ecomagination brand provides technologies for renewable energy, water filtration and wastewater treatment, smart building initiatives, sensing and detecting equipment, traffic signaling and transportation monitoring and management systems. The company also runs a GE Cities of the Future program. GE is partnering with national and regional governments to build new innovation centers while encouraging those areas to adopt smart grid incentives, such as in Markham, Ontario and Masdar in Abu Dhabi. Siemens has initiated the City of the Future program and is involved in a broad range of city pilots globally. In partnership with the Economist Intelligence Unit, Siemens also runs the Green City Index, which measures and ranks the environmental performance of cities from around the world. IBM is involved in pilot smart grid projects around the world, ranging from smart meter roll-out to country-wide integration. In 2010 it launched the Smarter Cities Challenge, which is IBM’s largest philanthropic initiative, with contributions to date valued at more than $50 million. IBM has deployed 700 top experts to help 116 cities around the world. In 2015, the program was extended for a fifth year, with additional projects to be deployed through 2016. 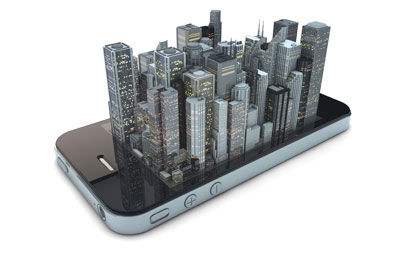 According to a corporate study conducted by Frost & Sullivan 3 , by 2025 around half of the world’s smart cities will be in Europe and North America.

The “smart city” market envelopes a number of different smart markets, such as smart grids, smart transport and smart energy.

For the year 2016, the market research company ABI Research is projecting an investment volume of over €30 billion for the installation of sensors in smart cities. This would be a fivefold increase compared to 2011. A study by the McKinsey Global Institute suggests the the worlds 600 fastest growing cities will account for 60% of the global economic growth between 2010 and 2025.

NanoFab Tools is a member of the COINS group of companies.