Part of Emerging Technology for the Built Environment series

Smart windows can dynamically change the tinting of glass to control the amount of light/heat that enters a building. They can also be used to create on-demand private spaces for offices. The market is being driven forward by the need for energy savings, as well as the impressive futuristic aesthetics which smart windows offer. This article reviews the current state-of-the-art of smart windows, the major market players and the potential market growth. 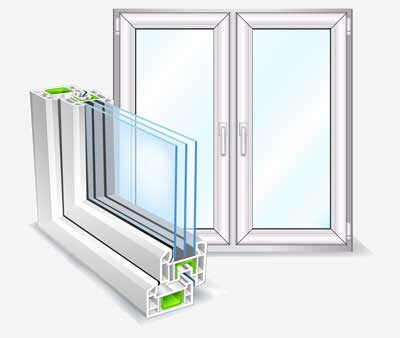 Windows in offices and residential buildings need to be multi-functional; they maximize the amount of sunlight and control the heat transfer into and out of the building. However, energy losses through windows and doors account for approximately 50% of the total energy consumption in buildings. In an effort to make buildings more energy efficient, scientists and engineers are collaborating with architects to develop advanced energy efficient window designs. 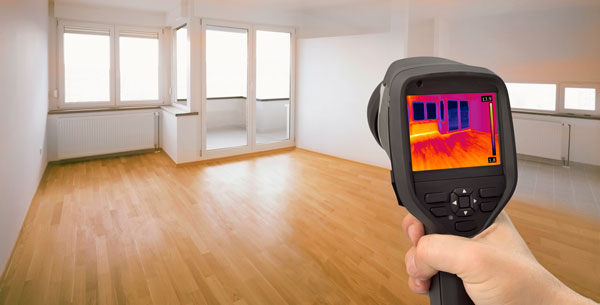 An infrared detector is taking an image of the heat loss in the room, which is indicated by the colour; red being hotter and blue cooler. The image clearly shows the heat loss through the windows and doors.

There have already been considerable advances in terms of structural design  (e.g. multi-layer glazing), and also with low-emissivity (or low-E) glass. Low-E glass uses a thin coating of a highly reflective material such as silver, which is thin enough to allow the light to pass through but controls the direction of the heat transfer. For example, in cooler climates the inside of the windows can be coated to reflect the heat back into the room and save energy on heating. In hotter climates the outside of the windows can be coated to reflect heat away and reduce the cooling load. In comparison with a good quality single pane window, a modern double pane low-E window can reduce heat loss by over 70%, saving a typical US home up to $500 per year. 1

To date window designs have been static , they can be optimised either for cooler or hotter climates or designed to give a compromise between the two extremes. Smart window technology creates the perfect window for all climates by actively regulating the transmittance of light and solar energy.

There are a variety of commercial smart glass technologies,  including Chromogenic, Suspended Particle Displays (SPD), and Liquid Crystal Displays (LCDs). Each technology has its advantages and disadvantages in terms of performance and cost.


Electrochromic windows only require power to initiate the transition, making them very energy efficient. To give an idea of the power requirement- 1500 square feet of glass (approx. 100 windows) would require less power than a 75 Watt light bulb! They typically take a few minutes to tint and don’t become completely opaque, so it always possible to see through the windows to the outdoors. Thermochromic and photochromic smart windows automatically change transparency as the environmental temperature or light level changes, avoiding the need for cabling.

The principle behind SPDs and LCDs is similar, except that SPDs consist of microscopic molecular particles suspended in a liquid solution and LCDs are liquid crystal micro-droplets in a polymer matrix. In the absence of an electric field the particles and liquid crystals are randomly arranged and they block the sunlight from passing. When an electric field is applied, the particles align and the sunlight can pass through. LCDs are a “digital smart window technology”, since they only have two switching states; clear and opaque. SPDs offer an infinite number of intermediate transition states. Both LCDs and SPDs have a high switching speed, typically 1-3 secs.

SPD Technology- Research Frontiers Inc is the major market player for SPD technology, and holds the longest history, since the company was originally established in 1965. The company offers smart glass for a broad range of applications from automotive to aircraft, to architectural and marine products. Research Frontiers has an impressive licensee list of over 40 companies with several A-list names, such as Mercedes-Benz, Hitachi Chemical Co, DuPont, Pilkington, and Polaroid.

Electrochromic- Sage Electrochromics is one of the best-backed players in the smart glass industry, with more than 300 patents to protect their ‘SageGlass’ product. The company was bought by the French multinational corporation Saint-Gobain in 2012, and the same year they opened a high volume manufacturing facility.

View Inc produces ‘Dynamic Glass’, which is also based on electrochromic technology. Backed by glass giant Corning Inc , the company emerged from stealth at the end of 2012 after 5 years working on the technology which they licensed from Lawrence Berkley National Laboratory. They started the commercial sale of their dynamic windows at the end of 2013, which can be tinted on demand by an iPhone app. By June 2014 View had already completed more than 100 projects. The company has raised $300 million from investors, and in September 2014 was announced a “Best of Buildings Award Winner”, granted by The US Green Building Council. 2

Thermochromic- The two major thermochromic glass manufacturers are Pleotint and Ravenbrick , both of which are based in the USA. Pleotint won the 2013 Glass Magazine Award “Most Innovative Commercial Windows” for their Suntuitive smart glass technology. RavenWindow technology is highlighted for being a smarter home product in TIME  Magazine’s 39-page special report on how technology and design are changing the way we live (July 2014). 3

LCD technology- US based Scienstry is a leading innovator in LCD smart glass. Their 3G switchable film has already been demonstrated in world class projects, such as at the World Expo 2010 Shanghai China, and in 24 major Chinese airports. The product can also be used as a projection screen- turning windows into TV screens, and opening up a market for smart windows in advertising. The 3G switchable film can be easily purchased on major internet shopping sites.

The number of smart window installers and suppliers has multiplied over the last few years. Some notable names include: SmartGlass International , Smart Films International , Invisishade and Smart Tint . Ireland based SmartGlass International offer a product range based on the LCD and SPD technologies which includes Privacy and Solar Smartglass, as well as Antibacterial Smartglass for medical applications, amongst others. Smart Films International, Invisishade and Smart Tint offer the possibility of buying smart films with adhesive that can be cut to size and stuck to the window. The advantages include a lower upfront cost and simplified installation, however they tend to offer a shorter warranty. The smart window market is already mature enough to offer both higher cost installations with a return of investment over the years, as well as low cost solutions. 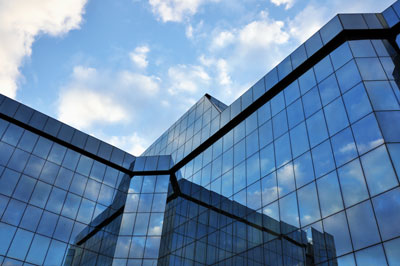 The market for smart windows is interlinked with smart glass in general, which has important applications in the transportation and consumer electronics sectors. The fast rate of development in these sectors can help to drive smart window technology forward in the coming years. According to the market research firm ‘Market and Markets’, the Smart Glass market was worth $1581.4 Million in 2013, and is expected to reach $5814 Million by 2020, at an estimated Compound An nual Growth Rate (CAGR) of 20% from 2014 to 2020. 4 Of course making the economics work is a major concern since the smart window systems are a premium product over standard window blinds, which have a similar shading effect. However, smart window companies say that the long term energy savings also need to be considered.


They claim that the windows can pay for themselves over time, and can actually be cost effective if you consider the entire system, e.g. smaller heating/cooling system. The windows have a high-end design and aesthetic effect, which explains why they have already been installed in high class hotels and business meetings rooms.

NanoFab Tools is a member of the COINS group of companies.